Weekend Workshop: Out Of Oblivion

Okay, so sadly this WW never got finished due to my Dad being rushed into hospital with abdominal pains. Turned out it was a massive cancer. They removed more than half his colon and he's doing okay now - though a post-op scan has revealed another cancer on his liver. Thankfully they've caught it early enough for it to be a fairly simple task to rid him of it.
Thusly, my artwork remains unfinished, and rather leave this to the winds, I thought it shoudl really get posted with the original piece of art that inspired Psynexus to do his thing!

We are still pushing forward with our projects however - though like this one, some are not priorities right now with other matters at hand.

Thanks for reading and enjoy! 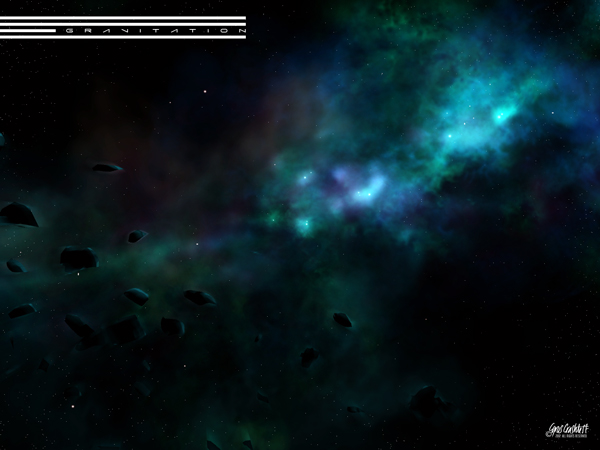 This will be my final entry before I enter the hibernation pods with the rest of the crew. With Earth weeks behind us, we leave with the best wishes at a time of turmoil and fear for our species. I’ll never forget how I felt as the familiar blue sphere grew smaller and smaller in the display and we bade our home farewell. It’s shocking to think now that the beautiful little gem in space that bore such beauty now drifts broken through the void, a crimson red.

Our ship, The Exodus, is a cradle for the remnants of humanity – a symbol for a new beginning somewhere beyond the star that spawned and nurtured us from children to adults. It glides through interstellar dust and solar winds, carrying us along like baby Moses drifting down the Nile to escape certain death. That’s who I am – who we all are. We are nothing more than helpless children, being pushed through space at the whim of the cosmos. The deadly currents that lay mere inches from our outer hull act as a guardian, holding us captive as it aids us along our journey.

Our destination is an earth-like planet known as Kepler-22b, some 600 light-years from Earth. Our journey will take thousands of years to complete, and Earth as we know it will no doubt be unrecognizable by the time we get there… if it still exists at all. The planet is smack-dab in the middle of the habitable zone –the range of conditions in which humans can survive – and is just over twice the size of Earth. For all intents and purposes it is paradise… much like Earth used to be in our infancy before we grew up and began to devour it like a plague of locusts.

I remember first seeing the Exodus from a docking port back on Earth before the bombs fell; it’s large, round hull strapped to enormous boosters reminiscent of an egg, carrying child. It looked like a tiny new world escaping the confines of an older, dying world… and that’s exactly what it is. The Exodus is a colony ship – but more than that, it is our last hope. The warnings went unheeded as our natural resources dwindled away into nothingness and our planet became a barren wasteland; a mere shell of the once lush and fertile habitat that once sustained us.

In the final days, an emergency summit of world leaders was convened and all remaining resources were committed to Project Exodus in hope that humanity could start over again. The decision was met with anger, confusion, and fear;sacrificing billions to save thousands seemed ludicrous. In a cruel twist of irony, the world united in a final fight for survival, committing every resource to the destruction of Exodus in order to claim the last resources for themselves. Words like “inhuman” and “cowards” pelted our hull along with small arms and IEDs. Humanity had made its last mistake in our long history of mistakes on planet Earth, and one last time we would learn that you never appreciate what you have until it’s gone. That’s when the bombs fell.

As we ascended towards the heavens, light like the fire of a thousand suns erupted beneath us, blotting out the skies. Nuclear explosions sent ripples through the air decimating clouds and pulverizing the skeletal remains of our cities, erasing the aftermath of our mistakes but not their memory. I sometimes dream that life continues to survive and thrive, unhindered by the virus once known as “humans” and it brings me hope, but every time I think aboutthat shriveled, burning ball of death I realize that such thoughts are nothing more than the fantasy of a madman.  

Despite the bleakness we leave behind and the blackness before us, there remains small shimmers of light that guide us along our journey. The blue-green light of nebulae and newborn stars glowing faintly in their nurseries dance across the bulkheads, beckoning us further into the unknown.No one knows what the future holds, but when I look back towards Earth and see our sun winking back at us, I know that there is hope. This is the feeling that I choose to hold on to as I enter my thousand-year slumber, and will hold on to until my eyes open again under the light of a new star, a new sky, and a new place to call home.
Posted by Cyrus Crashtest at 01:50

Newer Post Older Post Home
Subscribe to: Post Comments (Atom)
Welcome to CRASHNEXUS - the home of the collaborative creative efforts by American writer Psynexus and UK digital artist Cyrus Crashtest. Aside from long term projects, this blog will also feature our regular 'Weekend Workshop' challenges and one-shot output. Sign up via email, RSS or google connect to stay informed of what is going on.

PLEASE NOTE THAT ALL CONTENT IS COPYRIGHT OF EITHER CYRUS CRASHTEST OR PSYNEXUS IN 2011. ALL RIGHTS RESERVED.